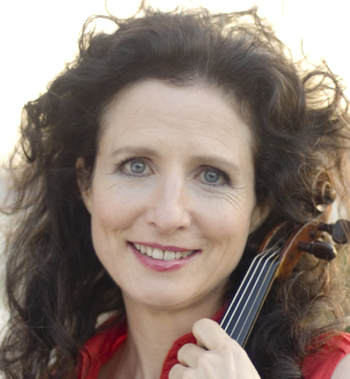 Madeleine Mitchell
​
Madeleine Mitchell has been described by The Times as ‘one of Britain's liveliest musical forces (and) foremost violinists'.  Her performances in some 50 countries as soloist and chamber musician in a wide repertoire are frequently broadcast for television and radio including the BBC Proms, ABC (Australia), Bayerischer Rundfunk, S4C and Italian TV when she won the Palma d’Oro, praised both for her vibrant lyrical intensity and pioneering creativity.

Her latest album, Violin Muse includes 7 world premiere recordings of music by established UK composers, mostly written for her, with the BBC National Orchestra of Wales under Edwin Outwater, works with piano and violin duos by Judith Weir, Master of the Queen’s Music, featured by the Violin Channel, Classic FM and The Strad.

Mitchell has performed violin concertos with orchestras including the St Petersburg Philharmonic, Czech and Polish Radio Symphony, Wurttemberg and Munich Chamber, the Royal Philharmonic and other London orchestras, Orchestra de Bahia Brazil, Welsh Chamber Orchestra and for the BBC, recently performing Elgar Violin Concerto in Russia with Ainars Rubikis. For the Queen’s Diamond Jubilee she returned to the Bath International Festival as soloist in the ‘Great Brits’ programme in Vaughan Williams ‘The Lark Ascending’, which she also performed as Canberra International Music Festival Artist-in-Residence and with Orchestra of the Swan in the Spring Sounds Festival. Her performance of Bruch Violin Concerto in the Edinburgh Festival was reviewed as ‘totally bewitching. She has a full rich tone which sang strongly.’  She performed Lou Harrison Violin Concerto with Percussion Orchestra in Symphony Hall International Series with new works. She also devised a unique ‘concerto’ for violin and choir, with new works by Jonathan Harvey, Thierry Pecou and Roxanna Panufnik, supported by Arts Council England in several festivals.

Mitchell’s acclaimed discography for which she has been nominated for Grammy and BBC Music Awards, includes ‘In Sunlight: Pieces for Madeleine Mitchell’ by MacMillan, Nyman and other well known UK composers, ‘FiddleSticks’ - Lou Harrison Violin Concerto with Percussion Orchestra and new companion pieces; the popular ‘Violin Songs’ - Classic FM’s featured CD, ‘British Treasures’ - early 20th century romantic violin sonatas, two albums for Naxos of music by William Alwyn and by Howard Blake (with the composer as pianist), Hummel violin sonatas, Bridge chamber music and the widely recommended Messiaen Quartet for the End of Time with Joanna MacGregor. Madeleine’s Linn recording of MacMillan Motet with solo violin and choir was BBC Music’s CD of the Month.

Madeleine Mitchell is well known for her recitals and her imaginative programming, described by The Herald as ‘a violinist in a million’ after a recital in Glasgow. Mitchell represented the UK for the Queen’s Jubilee in Rome in her ‘Century of British Music’ hosted by the British Ambassador and UKinNY at Lincoln Center. Recent engagements include recitals in Singapore, Wigmore and Barbican Halls London, BBC Radio 3, Schoenberg Center Vienna, Moscow, Dartington International Summer Festival and China. Mitchell has given recitals at Sydney Opera House, Seoul Center for the Arts and Hong Kong - part of a 3 month world tour supported by the British Council, played at many international festivals and frequently in London.  Madeleine Mitchell won the GBSF award for her recitals with Japanese pianist Noriko Ogawa and she has collaborated with many outstanding artists including Norbert Brainin (Amadeus Quartet) for his 80th birthday at Wigmore Hall. She regularly tours the US and she returned there in November 2017 to New York, Kansas, Texas and Colorado.
A highly creative personality, Madeleine Mitchell devised the Red Violin festival under Lord Menuhin's patronage, the first international eclectic celebration of the fiddle across the arts, held throughout Cardiff for which she was shortlisted for European Women of Achievement and Creative Briton Awards. She is also Director of the London Chamber Ensemble.

Madeleine Mitchell won the Tagore Gold Medal as Foundation Scholar at the Royal College of Music where she is a professor and consultant for the ground breaking EU funded  Performance Science research project TELMI. She was awarded the prestigious Fulbright/ITT Fellowship to study for a master's degree in New York, studying with Donald Weilerstein and Sylvia Rosenberg at Eastman and Dorothy DeLay at Juilliard and Aspen. She gives master classes worldwide and is on the faculty of the Orfeo International Music Festival in the Italian Alps and the international LMFL courses. Madeleine plays on an 1839 Rocca violin made in Turin.  She was made a Fellow of the Royal Society of Arts in 2000.   www.madeleinemitchell.com​ 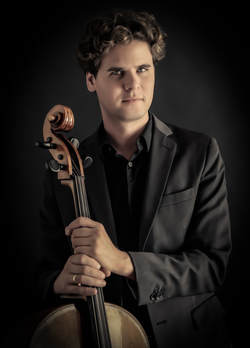 Cellist Theodore Buchholz has been lauded by newspaper critics as a “Virtuosic cellist,” an “Outstanding performer,” and a “Wonderful musician.” Debuting in New York’s Merkin Hall, he recently performed as recitalist and chamber musician in Alice Tully Hall at Lincoln Center, Tokyo, Idaho, Massachusetts, Michigan, Montana, Utah, North Carolina, Pennsylvania, Vermont, Wyoming, and as a faculty collaborative artist. Buchholz is the cellist of the Deco Piano Trio; more information on the trio is at www.decotrio.com. This season he will tour the recently commissioned concerto The High Songs for Amplified Cello and Chamber Winds by Carter Pann.

Buchholz’s recording of the Hans Winterberg Cello Sonata will be released under the Toccata label in 2018, and he is a member of True Concord whose CD recording won a 2016 Grammy Award. Theodore served as a professional orchestral musician for ten years, and has collaborated in chamber performances with members of the world’s leading ensembles. He performs on an outstanding cello made in 1877 by French luthier Charles Mennégand.

Dr. Buchholz studied at the San Francisco Conservatory of Music and the Manhattan School of Music. His principal teachers include Nathaniel Rosen, Bonnie Hampton, Robert Jesselson, and Sadao Harada of the Tokyo String Quartet.

As a nationally recognized researcher, Dr. Buchholz serves as the Cello Forum Editor for the award-winning journal American String Teacher. Dr. Buchholz’s research accomplishments include publications in the Journal of Historical Research in Music Education, American String Teacher, and frequent presentations at national conferences. His current research is focused on historical cello treatises, and he edited the technique book Exercises and Etudes for Elegance of Sound and Form in Cello Playing.

A fervent believer in the power of music education to transform lives and communities, Dr. Buchholz launched the University of Arizona String Project in 2015. This program employs ten university music majors and offers private lessons and ensemble rehearsals to 80 K-12 students. Through the endowment of a generous donor, this program offers free private lessons to community students who might otherwise have no exposure to music education.

As a leader in music education, Theodore Buchholz regularly appears as a guest artist/teacher in leading conservatories and universities. Dr. Buchholz is a voting member of the National Academy of Recording Arts and Sciences. He serves as a member of the ASTA Collegiate Committee and he is the Past-President of the American String Teachers Association of Arizona. Dr. Buchholz is the Director of the Tucson Cello Congress which annually brings 100 cellists to the UA for a weekend of concerts and master classes. 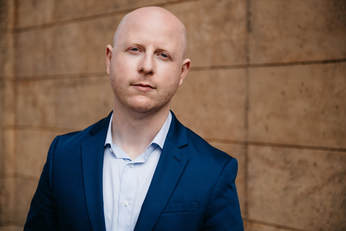 Jeffrey LaDeur
​
Praised for his "delicate keyboard touch and rich expressivity" (San Francisco Chronicle) and playing that is "deeply moving, probing, entirely felt as in the moment" (Eduard Laurel) Jeffrey LaDeur performs worldwide from the Kennedy Center for the Performing Arts to the San Francisco Jazz Center, from the Shanghai Conservatory to the Orlando Festival in the Netherlands. LaDeur is pianist and founding member of the acclaimed Delphi Trio, founder and artistic director of New Piano Collective and the San Francisco International Piano Festival.

In 2015, LaDeur began a survey of Debussy's complete solo piano music in the context of his influences and inspirations, culminating in an acclaimed debut recital at Carnegie Hall on the centennial of Debussy's death. His debut album, featuring works by Debussy and Rameau, was released on MSR Classics and has been hailed as "a masterpiece of understatement, simplicity, and 'old school' chord-playing where every note sings out with meaning" (Gramophone).
​
​As soloist with orchestra, Jeffrey maintains a repertoire of over forty concerti. Conductors with whom LaDeur has collaborated include George Cleve, Michael Morgan, Barbara Day Turner, Lawrence Golan, and Ming Luke. Recent and upcoming engagements feature LaDeur as soloist with San Francisco Chamber Orchestra and Benjamin Simon in works by Beethoven and Mozart, the Cambrian symphony in Brahms' Second Piano Concerto under the direction of Scott Krijnen, and as artist in residence with the San Jose Chamber Orchestra.

A passionate chamber musician, LaDeur concertizes internationally with the Delphi Trio. The Trio received the dedication of William Bolcom's first Piano Trio, the world premiere recording of which was released on Triptych (MSR Classics) along with trios by Beethoven and Brahms. Jeffrey has collaborated with artists such as Robert Mann, Bonnie Hampton, Geoff Nuttall, Ian Swensen, Anne Akiko Meyers, Toby Appel, David Requiro, and the Alexander, Telegraph, and Afiara Quartets.

​LaDeur holds degrees from the Eastman School of Music and San Francisco Conservatory of Music in piano performance and chamber music, respectively. Jeffrey counts among his teachers Mark Edwards, Douglas Humpherys, Yoshikazu Nagai, and Robert McDonald. Jeffrey received his formative musical training from pianist Annie Sherter, a student of Vlado Perlemuter and Alfred Cortot.
​S﻿ign up for our mailing list